Is There More To Life Than Beer And Chips?

Ham and Cheese. Lamb and Mint. Pork and Apple. Some ingredients just go together, well, like salt and vinegar. They just taste like they were made as two halves of a divine pairing and once upon a time some chef with a sense of adventure had discovered these long lost twins and repatriated them in joyful reunion. But the pairings we know of have largely been around for ages now – are they really the only good ingredient pairings out there in that vast expanse of nature? Or is it just that our flavour pairers have had their feet up for a long time and not bothered to find any more?

British superchef and TV wunderkind Heston Blumenthal certainly suspected the latter after messing around in the kitchen late one night and discovering that white chocolate paired perfectly with caviar. If these two worked well together, he reasoned, how many others did too? And WHY on earth did white chocolate pair with caviar? He then started out on a crusade of discovery and built a following of like-minded culinary types to develop the weird and wonderful world of food pairing. Part of this process is breaking the foods down into their components and then using algorithms – is there nothing they can’t do? – to hunt down other foods that share the same flavour mechanisms in order to ‘pair’ them.

But the Science of this is hard and boring! And, lest we forget, we do not eat food to test a mathematical theory’s elegance. We eat food because; it tastes ‘yummy’; it smells ‘delicimo’; or sometimes, if we’re feeling a little weepy, because it looks ‘pretty’. 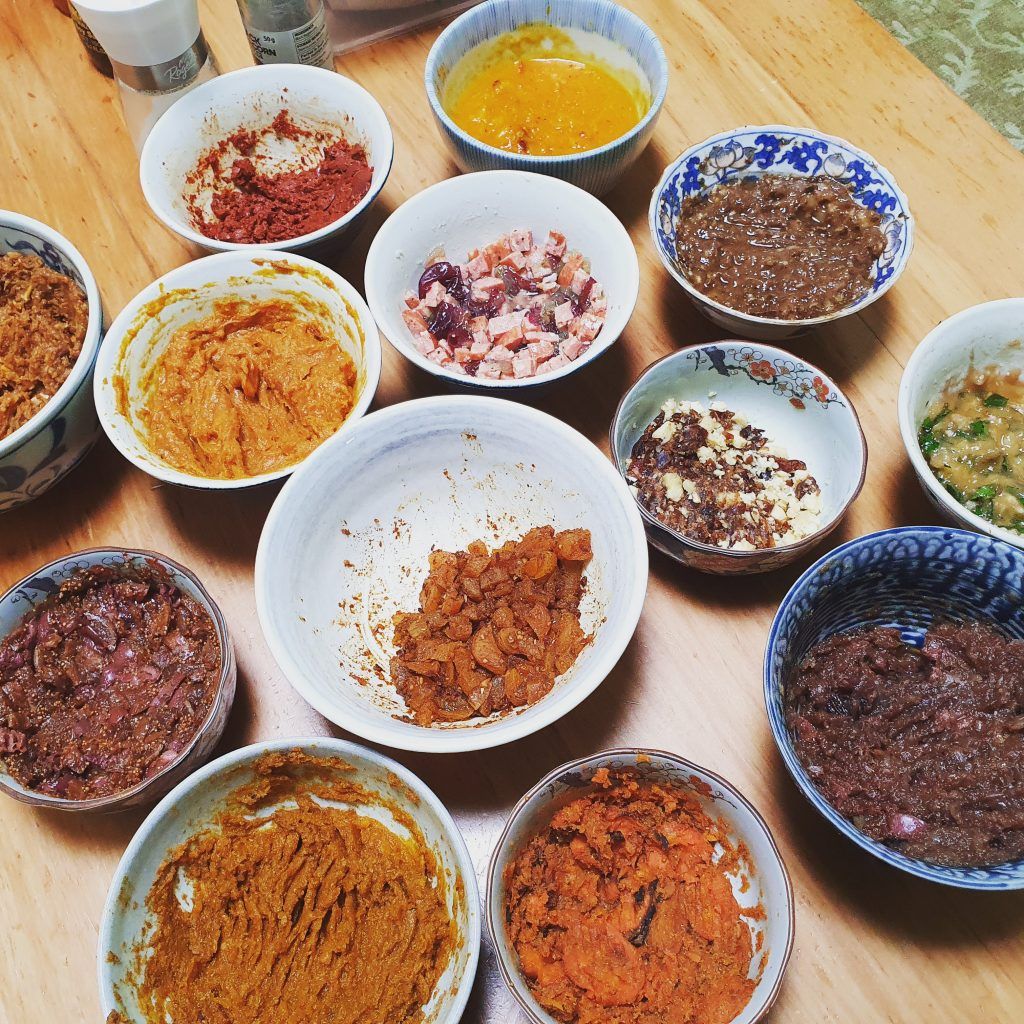 So let’s leave Heston and his lab technician chums to do their fiendish work safely out of sight and we’ll just reap the fruits of their labours by taste-testing the bizarre-sounding food pairings he has published online. My experimental process of choice is homemade Asian-style dumplings filled with a selection of weird mixed ingredients and steam/fried as per gyoza. The results are noted below:

Oh yeah, now we’re talking. So this one is probably not so unusual to most of you on the hors d’oeuvres circuit but it was a winner for me. Date is not an ingredient I use a lot as I don’t really like its flavour but the blue cheese disguises that nicely allowing you to experience that fleshy date texture Middle Easterners have enjoyed for centuries. Win!

If you think you’re eating too much protein-rich meat in your diet when all you do is shine the seat of your pants on an office chair, then this flesh-like option might be for you. The redness of the paprika even makes it end up looking like some sort of minced meat atrocity on the plate. Tasted good though.

Talk about umami central! Mind you, I really like miso so will enjoy it in pretty much everything save ice cream. A bit of a safe one from Heston but it will make a great puree for your next roast dish. Win.

This was the one I was most worried about trying as it just doesn’t sound right – on any level. Yet, it was possibly my favourite on the night as it had a variety or flavours, textures and even physical states in the mouth. I used a mild Spanish chorizo salami with some ordinary purple eating grapes from the supermarket. Try! Enjoy! Now!

Meh. I already knew about carrot and cumin and found this to be a little inferior tbh. To be fair, I probably didn’t give this a fair suck of the sav by doing a lousy job of roasting the carrot – but there were a bunch of Luddites in the house who were taking umbrage at me dominating the kitchen for hours on end. So I had to hurry my carrots into the stick blender early. And it showed.

You peel a banana and it’s solid, right? Yet, as soon as you mash it with a fork, it goes liquid – which isn’t ideal when you’re making dumplings. Still, the ones I did try were fantastic although more sweet than savoury. Next time I’ll try making a banana and parsley fritter – or even a smoothie. This really worked.

As soon as I started mixing these two together I got a hit of Eugenol, that essential oil present in cloves and often used to create banana essence as there is a clove note in banana. The mix looked disgusting in the bowl though and suffered the same liquid issues as above so it didn’t get a proper look in here. But I’ll be trying it again as this really should work well as they smell great together – and how many couples can you say that about?

Oh yeah, wow. I probably went a bit heavy on the Harissa so this just about blew my head off but spicy food fans will love it. Really, this one’s all about how apricot goes in a curry and I’d have to say; it goes very well indeed.

And, just like that, a dessert is born. Seriously, parsnip goes so well with pear it’s like they are two halves of the same thing. The vanilla really pushes this combination towards the dessert zone but it would take a better chef than me to make a savoury pear dish anyhow. Will be trying this again.

Meh. I roasted a brown onion so it was completely overpowering – even beyond the cinnamon! I really like onion but this was just like having a roast onion dumpling. Next time I will try raw red onion and see how that goes in the mix.

Yay. Another triumph. The salty, vinegariness of the olive cuts through the absurd sweetness of the fig to create an excellent match with a good stolid texture that makes for a nice meat substitute too. A definite winner for me.

Okay, so this wasn’t on Heston’s list but I’d already chucked some kumara in the oven to roast so didn’t want to waste it. After scrabbling through a few websites I found sweet potato goes well with the above so tried that. It went well although next time I’ll cut the kumara with a little oil as blended roast sweet potato is the stickiest, gooiest muck around and hard to work with. Worth another crack but mashed with a fork instead of a blender next time.

This was so worthwhile! Pretty much everything on Heston’s list was a winner for me or at least worthy of trying again. My eyes have been opened to the possibilities of food pairing and I will be utilizing some of these as side dishes in my meals from now on. Must go, I need to have my post-gym banana and parsley protein shake. Bon Appetit!

Swim Into The Net
The VISION AVTR: Mercedes-Benz On The Mind
Atari Is Starting A Casino Where You Win Cryptocurrency
Racing On The Back Of The Future
The Most Expensive Sneakers Ever Sold At Auction... For Now
The Ecstacy of Great Design
Load More
Back to top