Roger Dubuis has done it again. The luxury Swiss watchmaker known for pushing boundaries and challenging the status quo has released its latest masterpiece: the Excalibur Liu Wei Monotourbillon. This timepiece is the latest addition to the brand’s Urban Culture Tribe collection, which celebrates the rebel spirit and radical expertise that defines Roger Dubuis.

For this release, the brand teamed up with contemporary Chinese artist Liu Wei, a man whose art is as unclassifiable as he is. Liu Wei, a sculptor, drawer, and painter, is known for his witty cultural critiques and evocative installation pieces, which have been shown at museums and exhibitions around the globe. His art often reflects on the rapid evolution of the urban landscape and the digital transformation of society, capturing the dynamism and energy of the world’s ever-changing landscape.

The Excalibur Liu Wei Monotourbillon is a masterpiece of striking colours and architectural lines that represent the lively and intricate urban world. To bring Liu Wei’s vision to life, the brand’s watchmakers imagined an ingenious three-layer design for the timepiece. The first layer is a transparent sapphire glass engraved with vertical lines on both the front and back. These lines are then hand-filled with regular lacquer and UV paint to create a sophisticated architectural depth under UV light. The selection of shades and their varying effects reflect Liu Wei’s vision of the world’s vibrancy and energy. 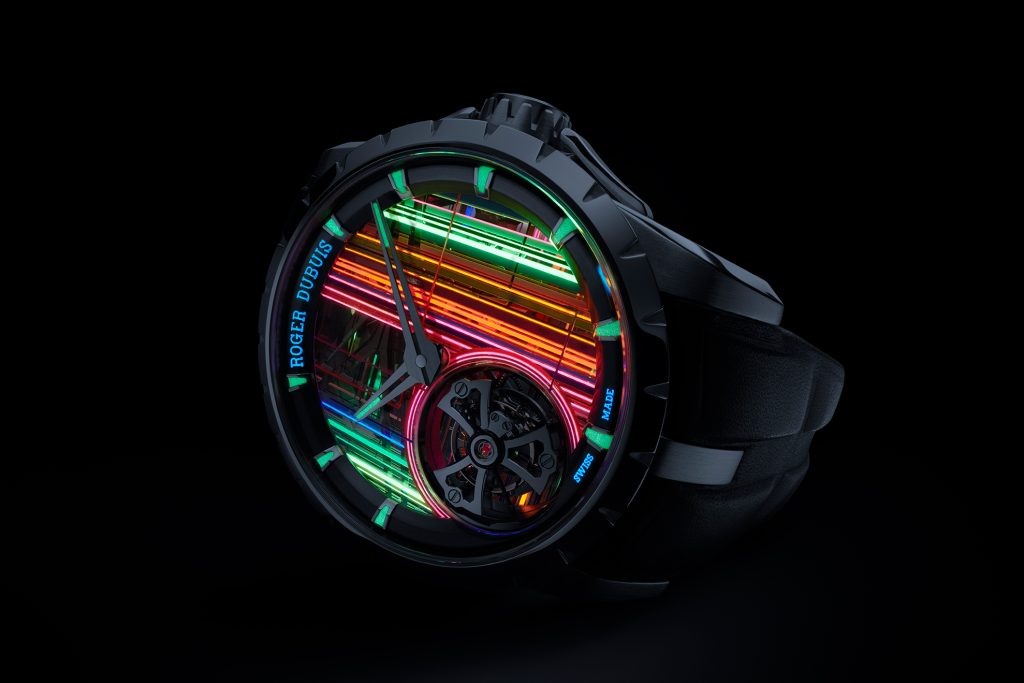 The second layer houses Roger Dubuis’ astral signature, the star-shaped bridge of the manually wound RD512 movement. In order to work within Liu Wei’s concept, the bridge has been made thinner. It features a grey structure with distinctive black lines, which provide a disruptive contrast to the intricate composition created by the colourful stripes of the first layer. This directly mirrors elements used by Liu Wei to disrupt the system in his own art.

The third and final layer is a sapphire glass caseback, laser-engraved with horizontal lines and hand-filled with UV paint. This creates a mesmerising effect when viewed under UV light, with shades of different colours blending together in harmony.

But this timepiece is more than just a work of art on the outside. The Calibre RD512 has been enhanced with a series of mechanical and aesthetic improvements, making it a feat of horological prowess. The power reserve has been increased to 72 hours, and the micro-rotor has been optimized to minimize its vibrations. The balance wheel inertia has been doubled to improve stability and make it less sensitive to shocks, and the escapement wheel and adjustable pallet-stones have been optimised for better resistance over time, efficiency, and energy transmission. These improvements, along with the use of a new lubricant, make this timepiece a hyper-performer.

New Heights For The Panerai Submersible
The Santos De Cartier Chronograph is a Golden Sight to Behold
The Rolex Sky-Dweller, A Worldly Classic
Speed Machines
A Godly Machine
Collective Forces