Set In Stone – The DNA Of An Entrepreneur

The founder of Prestige Surfaces, Matt Nash, has found business success in the sealing and cleaning of stone and concrete surfaces, but the entrepreneurial bug has been a part of his DNA far before he saw potential in the hard stuff. We talk to Matt about how to find success in any industry and how to scale while not destroying the company culture.

You seem to have been born an entrepreneur. Is that a fair assumption?

Yeah, absolutely. My journey started when I was probably five years old, where I found myself at the bottom of the streets selling everything from flowers to perfume to even fancy looking sticks from the garden. I knew from an early age what I wanted. I knew that I wanted to have a business and be successful.

I didn’t really see myself doing what I do today. If I looked forward from a young age to where I am now, doing what I’m doing, I don’t think that it would have really interested me that much because it’s not a very attractive industry, where it’s heavily focused on concrete and stone. I guess it’s not the most interesting thing to work with, but I feel like I’ve made it interesting.

I’ve learned this about myself, especially recently, I feel I am extremely creative and that is just becoming really evident at the moment. My industry isn’t really that glamorous, but I have been told that Prestige Surfaces’ marketing makes it look and feel sexy and interesting, and that is a plus.

I feel like I’m achieving something, by doing that, by infusing my creative flair into a boring area. That in itself is an incredible feeling and an incredible achievement and something that drives me to move forward.

Did you manage to sell many sticks from the backyard?

But I was just really drawn to it on another level that I just didn’t quite understand at the time and I was really good at it. I got recognised for that and it just took over from there. Now that I’ve found that niche and I’ve positioned myself where I am, I focus exclusively on that. I don’t go and drift off into other businesses and other areas where I lose focus on what my purpose and mission is.

I have to stay focused on exactly what I’m doing, which is Prestige Surfaces, and never lose focus and keep growing it, keep developing it and keep learning from it. 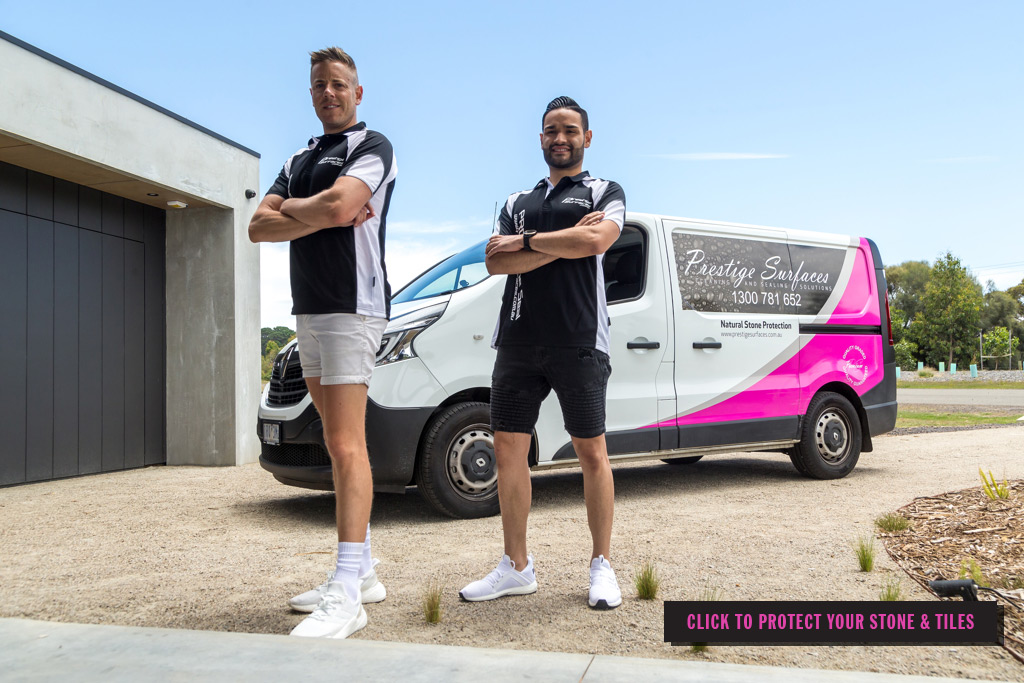 What do you make of the term entrepreneur? Kids growing up these days see it as the new rock star and a lot of that is probably based on the Silicon Valley stuff.

I think back then, when you thought of entrepreneurs, you would automatically think of Richard Branson and Donald Trump. They were my inspiration back then at those times. Obviously things have changed now with one of those people in particular.

When I grew up, I had essentially nothing. I come from a lower-income family. I went to a public school. I had a bit of a hard time, my parents separated early, I got picked on at school.

I saw those people in those dark times as a way out, or an inspiration to me. I saw the life they lived and it just resonated with me and that’s what I always wanted. So I tried and tried to get there with so many years of attempts and failures.

Everything I’ve done, everything I’ve tried, has given me the skills that I have today and that I’ve applied into this current business.

If we can go back to that time, it could have potentially gone the other way. You could have used the struggles that you’ve had as an excuse to opt out or turn to drugs or alcohol and really become a victim.

Yes, I suppose I could have easily gone down a negative path based on the experiences I had as a child. But I think it’s an absolute waste of energy living in the past and blaming people.

I don’t blame anyone. I almost see it as a thank you for making me who I am today. On another level, I think spirituality and law of attraction and those ways of life are pretty big for me as well. I think it’s really important to just accept things for what they are and accept life events for how they pan out. Learn from them, grow from them and they will make you the person that you are today.

Is it ever too late to make a shift and start looking ahead, instead of looking back?

It’s all dependent on the person. If they want to make a change, then they definitely can.

Anything is possible as long as you put your mind to it and you have the desire to get there. You’ve just gotta keep trying and trying. Every failure that happens, at the time it may seem really sh**ty and it will get you down, but if you believe in it and you keep trying, one day something will just come up and it might be the next success.

What you’re talking about there is something that’s really fundamental to the entrepreneurial journey; how you deal with failure. Is that something that we do well in general in Australia and New Zealand?

Don’t get me wrong, now I’m doing property as well. But when I say multiple things, I mean having one business here, one business there and other business here. How can you give all those businesses the attention that they deserve to thrive?

You’re really focused on Prestige Surfaces, but it doesn’t seem overly entrepreneurial to give your all into one thing. Has that been a struggle for you? Are you attracted by the next shiny thing that comes along?

I have been and it hasn’t really worked out. It’s all learning, it’s all experiences. What I find is I’m really in tune with myself and my energy. Starting a business takes up a lot of energy that I just don’t want to give away anymore.

My business has so much potential, it could be so much bigger than what it is, and that’s what I want to give my focus to. If I’m sitting in a place where I might be a bit bored or a bit complacent, then I need to get back up and get out there and do something, like start up in LA or start up in Queensland or New Zealand. I’d rather put that energy into my business, rather than something else that’s got a good chance of failing.

The percentage of businesses that get through and thrive is quite low, so I make a calculated risk. Usually I won’t go into starting something new now that I have found my niche. I really genuinely believe that this is what I’m supposed to be doing and that’s what I want to give my energy and focus to. 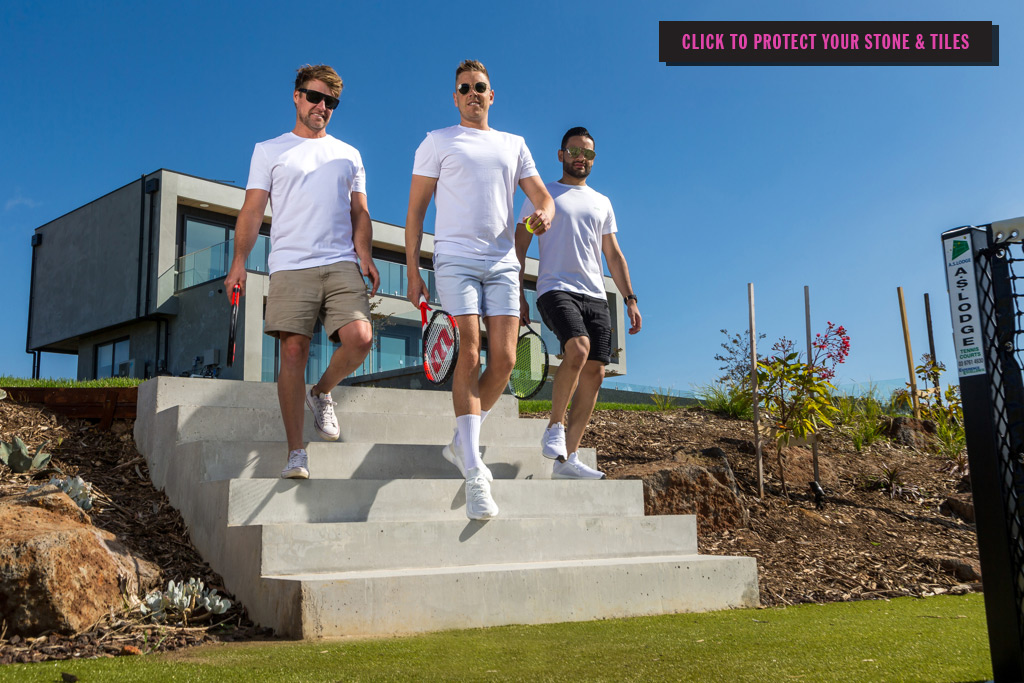 I have 15 employees and 11 vehicles operating in Melbourne and Sydney. We’ve just launched our product range, #JUSTSEALIT, and that is starting to go quite well. My focus is the service component. For many years, I really didn’t like that because it was dealing with people and people are hard to manage. Managing people is one of the hardest things that you do.

That said, I’ve become better and better at hiring the right people over the years, and today I’ve got this amazing crew working for me. The attitude is just unbelievable and you can just feel it when you’re around them. It’s just a cool environment. My team are grateful to work for Prestige Surfaces and they remind me often of how much they enjoy and appreciate their jobs. I think that finding good people with a great work ethic and creating a great working culture is one of the best things you can do for your business. It’s so rewarding too, being able to build a business that people love working for and that makes a difference in your employees’ lives.

You get to a point where it’s not about the money anymore. You get to a point where you’ve bought everything, you’ve got the house, you’ve got the car, you’ve got everything. All the material stuff becomes boring. It’s not enough to drive you, but when you get that gratitude and thanks from your team, and from your customers, then that’s what it’s all about. That’s something to drive you and keep you going. Otherwise, what’s the point?

The last six months have been absolute magic to me. I was in such a rut, a place of complacency, which is a dangerous place to be as a business owner, but it happens. You get to a point where you’ve grown your business, you’re established, the money’s coming in, everything flows, nothing can stop you.

I had a manager that ran the business. I had gotten to a point where I was working a few hours a week. But what do you do as a 33 year old? That’s not healthy, you shouldn’t be working three or four hours a week when you’re 33, because all your friends are working jobs and you’re not stimulated enough.

You’ve really got to find your purpose. You’ve got to find something that motivates you. I was in such a rut. As I said back before, I’m big on the law of attraction. I’m big on spirituality. Things just started to fall into place a few months ago. I know what I want to do, I need to put myself out there, I need to grow this. Helping people is now a big focus of mine. There’s lots to learn. There’s lots to be done.

Does that give you the impetus to then grow and scale that into these different areas that you’re talking about?

Yeah, absolutely. Back when I started, it was all about me building a business to give me an income, to give me money. Now it’s about everyone else. Like anything, you won’t receive unless you give, so that’s the way I live my life now.

Apart from following your gut, are there any other key takeaways that you would give to other leaders to make sure that their culture is on track?

It’s a tough one and something that I’m still learning to this day. I think the biggest take-out is just trust your gut, trust yourself. If you feel that separation from your team, your business, that “us” and “them” mentality. If someone has that mentality, they’re not compatible with you or your business or your vision and they need to go.

You are always going to get those people that are going to find ways to be divisive and create an “us” and “them” environment, right?

There unfortunately are. You’ve just got to keep a close eye on them. You have to manage them. You are going to get people that for whatever reason, they potentially don’t want to be there, whatever it is. That’s going to happen and when you’ve got lots of employees, there’s going to be those people, you can’t help it. But you can manage them and separate them from your core team.

To find out more visit prestigesurfaces.com.au

Can't Afford an Island? Rent this one
The VISION AVTR: Mercedes-Benz On The Mind
The Moon Habitat Made Of Paper
This Luxury Super-Yacht Is Insanely Over The Top
Loyal Wingman
Tips From The Top